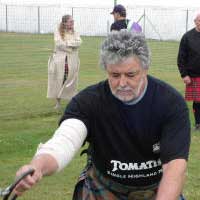 Kent Durso began his throwing career at the age of 51, long after a distinguished collegiate Olympic weightlifting career at the University of Notre Dame.  Also a standout in baseball and track, Kent began looking for something to do while his daughters competed in Scottish dance competitions.  Settling on the heavy events, he began his throwing career around the South and Mid-west as an Open Amateur, competing with men less than half his age.  When the Masters category began to catch on, Kent started competing with men a bit closer to his own age-- and set a total of six world records in three age groups.

Although an injury halted his throwing career, Kent won the US Nationals and Pan American Masters Olympic lifting championships in 2011.  Perhaps a return to throwing is in the cards for this Highland Games champion.