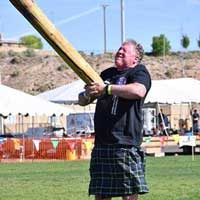 A top thrower for many years, and a fellow elder of the Masters Clan, I have had the privilege of throwing with this inductee on many occasions.  I have lost to this thrower, and I have won against this thrower.  He was always gracious no matter the outcome, and I hope I was the same.

My friend owns at least one current world record, and appears a number of times in the Top Ten scores over the years in individual events.  His top event, and the event he probably takes the most pride in, is the caber, and he is a master with few equals.  However, across the board, he is a strong thrower with no weak events.

Off the field, he is a friendly, knowledgeable and honorable man.  To know him is to be impressed by him, especially in his knowledge of things Scottish, and of the Clan that carries his name, and in which he takes great pride.

He is as accomplished off the field as on it, holding leadership positions in his regional Scottish Association, the RMSA, and he is the AD for one of the great games out west, Pikes Peak.

It is my great honor and privilege to induct my friend and fellow competitor into the 2017 Scottish Masters Athletics International Hall of Fame, at the Masters World Championship games here in Iceland.  “Coach” Mark Buchanan.