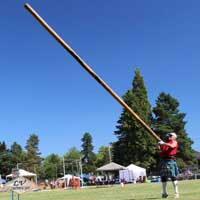 Our next inductee looks as though he has stepped from the pages of history here in Iceland. He’s big, long-limbed, towers over opponents, wields a mean hammer and fork among the weapons in his arsenal, has a long gray flowing beard, and an infectious laugh as big as any Viking of old. I’m talking about my good friend, Al Stagner.

Now in his tenth year competing in the Master’s World Championships, Al has the great distinction of having won his class in each country these games have been held. So he has conquered everywhere he has gone. Between 2009 and 2011, he won successively in Scotland, the U.S and Canada. Like others with a Track and Field background, Al early mastered stones and hammers, and soon everything else—especially WOB and sheaf. I know these things because Al and I have shared a strong and beneficial rivalry these ten years, pushing each other in regional games to be ready for the master’s championships. In many games, one of us may win 5 events, the other guy 4 events.  It is that kind of fun and enjoyable rivalry.

It is especially nice to be inducting Al this year in which his wonderful bride, Karen, competes in her first master’s championship. Like some others, she could only stay on the sideline so long, qualifying with throws in Phoenix, Las Vegas and Costa Mesa. She has softened a few of Al’s rough edges, but not so much that he is not the same guy that burst onto the scene a decade ago.

Get up here, big guy, and get your well-deserved recognition in the Master’s Hall of Fame!