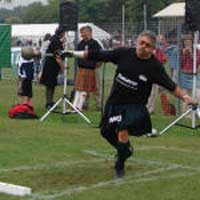 Frank Carl started his throwing career in junior high school, steadily improving his throws with the shot and discus through high school.  After graduating and spending the summer working out and putting on 25 pounds, Frank excelled at Orange Coast College, earning a scholarship to Long Beach State.  He continued improving through his college career, setting school records in both the shot and discus.  He finished third in NCAA discus in 1960, and second in 1961.

Well into a long and successful career as a football and track coach, and now over 50, Frank began competing in masters track and field, winning at the local and national levels.  It wasn’t until age 60 that Frank was introduced to the Highland Games, to which he then devoted himself exclusively.  He competed in local games from 1998 until 2008, as well as seven of the first eight Masters World Championships, winning 5 times in 3 age classes.  His name can be found in numerous places on the SMAI list of top throws, and he holds 2 world records in the 70+ group as of this writing.