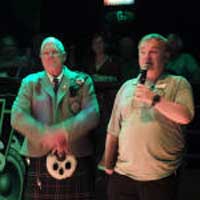 A native of Newcastle, England, Gerry moved to Inverness, Scotland to work for the Highland Council in 1999 after a 20-year career at British Gas.  His rise in Inverness, however, was electric.  His promotional and organizational skills repeatedly benefitted the City of Inverness, which bestowed awards on him in 2003 and again in 2009.

In his role as Secretary of the Inverness Highland Games, Gerry collaborated with Bill Scruggs to bring the Masters World Championships to Inverness in 2006, again in 2009 and (with Kevin Rogers at the SMAI helm) in 2014.  Gerry also staged the World Professional Championships in 2007.

It is the 2014 Masters World Championships that will, perhaps, be remembered as the most successful, as it garnered distinction as both the biggest highland games competition (number of athletes) ever, as well as for staging a Guinness World Record-breaking simultaneous caber toss.

An academic as well as a world-class promoter and events organizer, Gerry received his MSc in International Event Management in 2011. His thesis entitled “Scotland’s Highland Games Challenges in an Aging Society” examined the collapse of 20 percent of Scotland’s highland games since 2000, and remains the world’s only academic study of highland games organizers as of this writing.

His manifold contributions to the sport, to Masters throwing, and to SMAI in particular, have earned Gerry induction as the first non-athlete in the SMAI Hall of Fame.