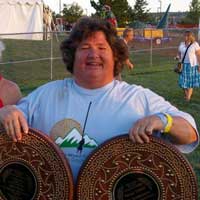 After a lifetime of softball, volleyball and basketball, Sue Hallen became a track and field thrower and a powerlifter.  She excelled at both, competing in all of the throws events as a master’s athlete in the USATF, and accumulating multiple USAPL/IPF World Masters Champion titles in powerlifting.  Having a strength and throwing background, Sue was approached about throwing in the highland games.  At age 43, she began competing annually at the Indiana Highland Games.

In 2008, Sue got a call from Billy Scruggs informing her of the new Women’s 50+ class at the World Master’s Championships in Saline, Michigan.  Competing with a surgically reattached bicep with her arm in a sling, Sue finished in 2nd place overall.  The die was cast.  Sue competed in each subsequent Master’s World Championship through 2013, making the podium every year and winning two World Championships.  Other honors include the Bill Anderson Combined Hammer (2010, 2012) and John Ross Combined Weight for Distance (2010, 2011) targes, and age group World Records (2010-2012) for light and heavy hammer.

Sue Hallen was inducted into SMAI’s Hall of Fame at the Master’s World Championships in Albuquerque, NM on May 17, 2013.