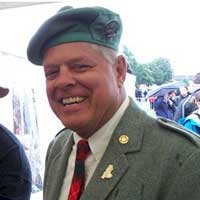 Angus Billy Scruggs will always be the rock and the cornerstone of Scottish Masters Athletics. What started as an idea between friends Dan DeWelt, Bill Butler and Billy Scruggs was brought to fruition by Angus Billy through years of care, planning, and work.  And with the help of his understanding wife, Linda.

After a talk with Greg Bradshaw, the AD in Tulsa, Oklahoma, and despite being a year or two past “half a hundred”, Billy started practicing with home-made Scottish implements.  After competing in a demonstration in Glasgow, his first “real” competition was at Estes Park, in 1997. He finished ninth in a field of ten. Undaunted, and training now with Dan DeWelt, Billy went on to wins in Tulsa, Loch Lomond, Sacramento, McPherson and elsewhere. Sacramento was a favorite competition because of Bill Butler-- friend and SMAI co-founder. And it was where he won his MWC in 2002.

For ten years-- from Ft Smith, Arkansas to California, to New Hampshire, Inverness, Scotland and Denver, Colorado- - Billy grew the organization from an idea into the world-class Masters World Championships event that we enjoy today. Through 2010, more than 400 different athletes from 11 countries have competed in eight states across America and in Scotland.

Dozens of competitions around the world have added a Masters class, and hundreds of older athletes— including women, whose cause Billy was among the first to embrace are now able to take the field in friendly competition with their contemporaries.  They all owe Angus Billy a debt of gratitude for the opportunity that he helped create and for his immeasurable contribution to our sport.