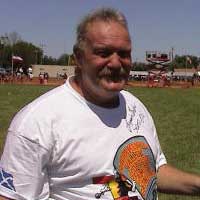 Bill Butler was not only a superb Highland Games athlete, he played a leading role in Scottish athletics for more than a decade, co-founding Scottish Masters Athletics International and serving in an official capacity in a number of other organizations promoting Scottish culture.

A “gentle giant” of imposing stature at 6’3” and 265 pounds, Bill was a powerful athlete whose 22# hammer throw remains a World Record in the Master’s 60-64 age group as of this writing (April, 2011).  He also has several other marks in the 60-64 age group that rank among the best of all time, including a 16# hammer throw ranked as the 2nd best ever.

A self-made man who was devoted to his family, Bill left this life on December 26, 2006 after suffering a heart attack at home.  Along with his outstanding athleticism and power, Bill is remembered for his kindness and friendly, helpful nature along with his love of life and all things Scottish.